“A place to give up”, these were the words written in an article of a very well known German newspaper called “Die Welt” in 2011, describing the city of Chisinau. These were the first words I have read about the tiny Republic located in between Romania and Ukraine when I applied to my voluntary service in Chisinau. The article mentions its personal travel warning even right in the headline of the article. But these were also the first words that struck me very hard – not primarily because of the negative choice of words and the intended negative wow-effect, but especially because of their self-given right to display the Moldovan capital in
such a negative way, playing the superficial game of clickbaiting combined with ironic tone to the detriment of the citizens of “Europe’s little unknown”, words found to describe Moldova by Sueddeutsche Zeitung.

I have to admit that these words made me apply to the European Voluntary Service, having read them before my application. I simply could not believe the bias in the article’s description of Moldova, feeling a little deceived but also sad. Thus, I had to apply to make it a personal challenge to explore the little unknown, a country that surely has more to offer than the simple look of grew Soviet architecture and old Ladas. I did not care about the given lack of sight seeing attractions, what I did care about were the people and their stories. A country is so much more than easily written denunciations of a German author staying just for a weekend trip in Moldova. The daily life makes up the emotions and forms the identity, the people’s daily life stories will make you learn. It is a good balance to inform oneself by unbiased books and articles, adding the personal experience and daily life stories. As I got accepted, I felt grateful for this next chapter.

Of course, some of the negativity which is connected to Moldova does not come from scratch. It might be true that some problems (such as economic, social and political) combined might have a negative impact on Moldovan citizens’ everyday life. But what I want to support is a reification of the debate in such spheres – things have to be based on facts. A world put in easy words, that is not possible. Especially with regard to the processes going on in Moldova, be it politically, economically or socially, one needs to bring arguments without ignoring the another side or party or even hurting it. For example, in political movements with global impact, right-wing populism tries to put the world in easy phrases.That would simply not even work for a Republic “in between” the East and the West, with lots of historic influences and different political landscapes.

What also made me think a lot is that a lot of people I have spoken with before going to Moldova – apart from the fact some had to ask twice to just get the name of Chisinau right did not know a lot about Moldova. And when they brought little more interest once they got the pronunciation right, when I made them watch some pictures, the negative comments continued. But undoubtedly in the case of Germany, one has to go beyond this two-sentence dialogue. Because only a very few do know that Chisinau went through historically very hard times and that the Nazi regime in WWII in collaboration with the Romanian military fully destroyed Chisinau, “reduced” the Jewish population from 60,000 to 86 and created a Jewish ghetto that cannot be described in words as to its inhuman cruelties. By telling that, I would like to underline that with interest in its people, history and culture, instead of just pigeonholing whole of Moldova, by going beyond the headlines, Moldova might be even more interesting than well known tourist countries. And “beautiful” is not just optically, in this context, beautiful means to be allowed to learn about the little unknown. 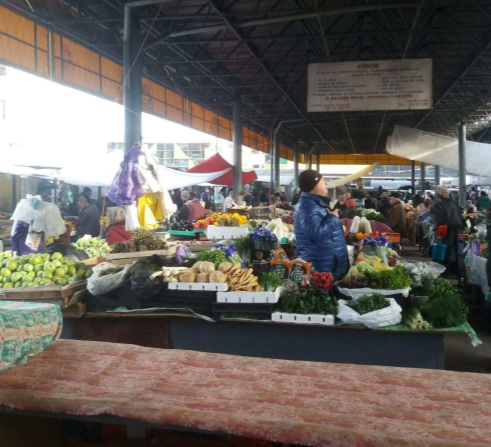 With this attitude in mind I arrived in Chisinau. Being impressed from the very beginning on, I can remember when Andrej picked me up at the airport and mentioning the good times he had in Moldova so far. Getting off the bus, when staring at the street scene, I felt somewhat like being in a museum, being full of gratitude and joy. I have already been to Minsk but this
was so different.

What is more is that I felt comfortable in Chisinau from the beginning on because of its compact infrastructure. Half a year ago, Amman was my home for over four months, which was chaos, chaos, and chaos. But the tranquillity and one-way Stefan Cel Mare Boulevard did not demand as much as Amman from me. This little chaos from the central market brought back the feeling of market culture, but nobody was screaming or even singing the prices to my surprise. Chisinau looked so green and marvellous, strolling along the Stefan-Cel-Mare Boulevard, passing several green parks. I liked the combination of different areas of neighbourhood, which combined in total, enriches the whole experience. The suburb I was living in was very authentic, no foreigners at all. Near the Botanica I was told a lot of students also like living there. In the supermarket even the staff (cashier and meat counter) asked me about where I am from. Buying the tickets in the trolleybus was also quite an experience, I still do not understand how the ticket inspector manages his/her way through the masses of bus passengers. Furthermore, I do still believe in underground seats of Marschrutkas observing endless amounts of people getting off.

Passing Botanica suburbs and the marvellous Stefan Cel Mare Boulevard, the chaotic central market of Chisinau offers a neighbourhood with tiny cafes and restaurants in direction to the university and OSCE Mission office. You pass the little streets and walk along the OSCE building and Moldova State University down the very long and newly built stairs to the Valea Morilor lake. After the first working day in the evening sun created a moment of perfection. After getting to know other volunteers that stayed in Moldova or Chisinau, too, I have come across the sentence “You won’t find too many Burger Kings or Mc Donalds” – a
fact I love. When you just order something randomly at local cantines such as Galbenus because you can’t pronounce the meal names in proper Russian yet, you get of course liver which you pretend to like eating.

But apart from these tiny obstacles my first impressions and moments in Chisinau were impressive, giving me a feeling that I have made the right decision, the feeling that I am ready to explore the “little unknown.” 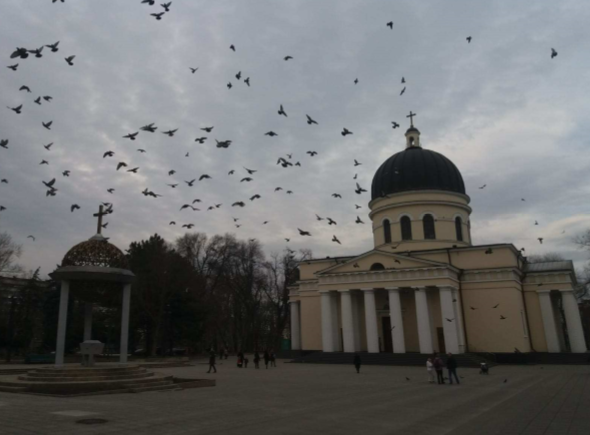